The mechanics are essentially the rules and procedures of a game, in which they guide the player and how the game responds to the player’s moves or actions. These mechanics may often be taught to the player through gameplay, or explicitly stated through dialogue or text otherwise.

“Through the mechanics you create, you define how the game is going to work for the people who play it.”

You generally want these mechanics to be clear, and to enhance the experience of your game. It is with utmost importance that you think of the mechanics of your game before development via prototyping as they are a critical component of good game design, although they may not be perfect at first so you’ll have to test and tweak it as time goes.

Before starting development on a game, it is important to create a short prototype of your mechanic to make sure it works. You can also plan this out beforehand with flowcharts to understand how your code will work alongside it better.

As shown in Figure 1, this is a simple flowchart representation of the game flow in ‘Rock, Paper and Scissors’. This shows how the mechanics of the game will work and how they’re connected, as well as what causes a win and lose condition.

For our project, we will have to identify a 2D web-based game mechanic and build a prototype that implements this specific mechanic making use of native HTML5, CSS3 and JavaScript.

Our prototypes in class will be tested by each other as well, we’ll be making use out of these test results to determine how our prototype performed and what necessary changes are needed to improve the usability and interaction of our mechanic.

What I’m set out to achieve is that I am interested in developing a simple arcade game alongside the likes of ‘Space Invaders’. Typically many of these arcade games from years ago had focused primarily on a single mechanic, which should be a reasonable goal to aim for.

“The basic mechanics of play for the Space Invaders genre are fairly simple: move your laser base left or right along the bottom of the screen and shoot the endless waves of aliens descending towards you.”

As shown in Figure 2, the main goal of my prototype is to make a game that has simple controls and mechanics that the player will be able to pick up on the fly. I plan on doing this by just using the mouse to control the player. 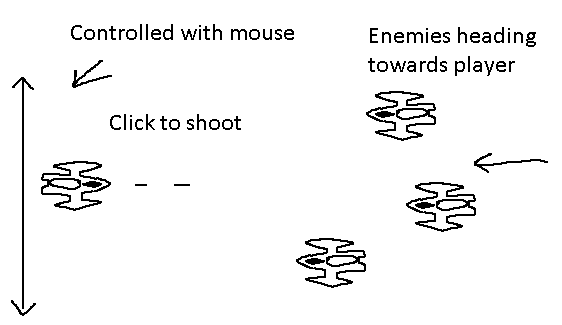 Enemies will only appear from the right of the screen at a random position and head towards the player, you will be able to avoid and both shoot these enemies with the movement and mechanics provided.

Depending on player feedback towards how the prototype performs, I intend for it to be relatively easy to understand but will add changes to the controls and difficulty if necessary.

There is a general concern about gambling within most modern video-games nowadays, typically found in many multiplayer-focused games there is a known feature called “Loot Boxes”. These are consumable items which may contain different cosmetics or items the player can use in-game.

“A loot box is a consumable virtual item which can be redeemed to receive a randomized selection of further virtual items, or loot.”

However, the main issue resides in that many of these consumable items are purchasable with real currency and are also entirely focused on the player paying for the chance of getting anything of value – most of which is unlikely due to the huge selection of items being completely randomized.

There has also been many legal concerns surrounding this topic, particularly in the US the legal definition of gambling is as follows:

“A person engages in gambling if he stakes or risks something of value upon the outcome of a contest of chance or a future contingent event not under his control or influence, upon an agreement or understanding that he or someone else will receive something of value in the event of a certain outcome.”

By definition, loot boxes within games that can be redeemed with currency to receive a random selection of items could very well be considered as a form of gambling in of itself.

Although, you could argue that if the loot boxes can be purchased through in-game currency instead then it is not exactly tied to real money (It may be possible to earn these entirely throughout gameplay as well).

Despite this though, you can still purchase these loot boxes through real money. Even if there is an alternative way to achieve these items without paying, it may be much more grindier and slower by intention to further incentivise the player to start spending real cash.

Personally, I feel that loot boxes shouldn’t be allowed within games as the system behind it has the same psychological impact as gambling. They are an intentional way to encourage players towards spending more on the game by feeding into bad habits associated with gambling.

“Whether or not we agree that loot boxes are gambling, the psychological mechanism behind both is nonetheless the same although the outcome is not: they are a form of intermittent rewards with a variable ratio reinforcement schedule (aka variable rewards).”

To further prove my point that these loot boxes can have a negative effect on gamers, I’ve provided a study (See Figure 1) that shows the number of children with gambling problems and how it has heavily increased within the UK during 2018, in particular the prevalence of gambling amongst children has risen from 0.9% in 2017 towards 1.7%.

This certainly does raise some issues on the ethicality of loot boxes in games, as despite whether or not you pay real money for them they are still made to be addictive in mind. Many games geared towards the age groups of children and teenagers, specifically the more popular games nowadays being Overwatch or Fortnite which contain such features.

As described in the Art of game Design by Jesse Schell, there are four basic elements that form a game. As a games developer you must understand how to use each of these four elements; these elements consist of the game’s Mechanics, Story, Aesthetics and Technology.

First off, lets explain the mechanics. They are known as the procedures and rules of the game, your mechanics will dictate the role of your game – this’ll determine what players can or can’t achieve throughout gameplay. This is arguably the most important part of the elements, as mechanics are required to discern a game between other mediums of media as described.

“If you compare games to more linear entertainment experiences (books, movies, etc.), you will note that while linear experiences involve technology, story, and aesthetics, they do not involve mechanics for it is mechanics that make a game a game.”

An example of how mechanics would be provided in a game could be how the player can take advantage of several power ups. The Mario Bros series has been known to introduce a wide variety of powerups that can change up gameplay as shown in Figure 1, these are able to give the player certain advantages such as extra firepower or agility. Although a typical mechanic, it can provide new and fun playstyles that the player can experiment with, this is a good mechanic as the different advantages each powerup provides will incentivize the player to try and find them throughout gameplay. I think that this gives the game a sense of variety, even though the gameplay is simple and easy to learn it provides a new edge for players to master.

The next element up would be the story, which is the sequence of events that unfold within your game. Some games tend to be mostly linear and pre-scripted, however others can be more branching and emergent. While telling a story you have to tell it through your game by making use of it’s mechanics.

“When you have a story you want to tell through your game, you have to choose mechanics that will both strengthen that story and let that story emerge.”

An example of how a story can be provided within a game would be giving the player different options of dialogue to choose, this is typically found within RPG such as Deus Ex in Figure 2. As well as helping convey the game’s story, it will also help personalize the player’s character to fit who they want to be. This generally helps make the game feel more immersive and to give the player the feeling that their actions can have true weight to them.

Another important element of a game would be its aesthetics, this is how the game is visualized to the player. It is considerably important as it has the most direct relationship to the player’s experience. Not only would this cover looks, but sounds and many other features as well, choosing the right aesthetics for your game can help reinforce the other elements of the game and make the players feel that they are in the world that the aesthetics have defined. I feel like this is one important way to present a story to the player, having direct interaction with the story makes it stand out from other media.

“When you have a certain look, or tone, that you want players to experience and become immersed in, you will need to choose a technology that will not only allow the aesthetics to come through, but amplify and reinforce them.”

An example of how the aesthetics provided in a game can help enhance it would be the grimy comic book art style present in Madworld. Not only does the game look authentic to the style its based on, but many of the mechanics and actions tied to the game will also make use of the style. As shown in Figure 3, an action being performed by the player has text pop out as if it were an an action in a comic book – Not only does this make the game more true to the style but I also think it provides a much more immersive and unique experience.

“It was the first video game that allowed a player to fight an advancing army, and this was only possible due to the custom motherboard that was created for it. An entirely new set of gameplay mechanics was made possible with this technology. It was created solely for that purpose.”